You are here: Home1 / Horses 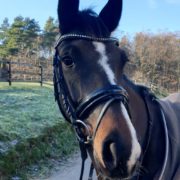 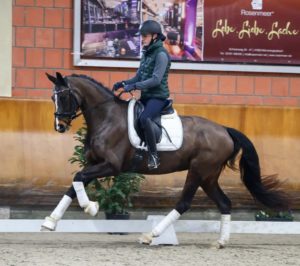 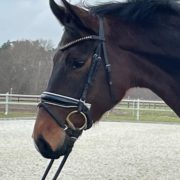 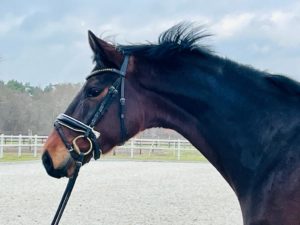 This attractive and very friendly hannoverian gelding was broken in 2022 and shows his great potential for the dressage rings with a lot of rhythm, ground coverage and elasticity in the basic gaits. Moreover he has good shoulder freedom and active hind legs, which will facilitate the training for higher levels. He convinces day by day with his great riding qualities and his attitude: he always wants to please his rider and learns quickly. The first starts in competitions can come! Quantino is directly from the breeder where he grew up in perfect conditions and was given enough time to grow into his beautiful, large framed body!

Quantino carries excellent dressage bloodlines: The sire Quantensprung won the bronze medal at the world championships for young horses in 2015 and also convinces as dressage sire: Among his offspring are already many licensed stallions as well as successful dressage horses. The dam of this promising dressage prospect is by the famous dressage sires Sir Donnerhall and Rohdiamant.

Quantino is a great dressage prospect with a ideal character, and he is suitable also for amateur riders. 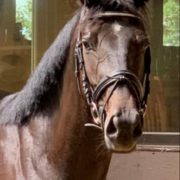 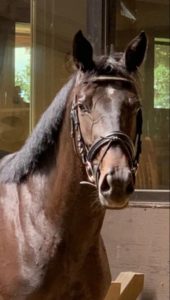 A top offer for breeding and leasure: Interesting pedigree, successful dam line, ridden and in 2022 she had a promising foal

This beautiful and very friendly mare Ayla comes directly from her breeder. She was broken at the age of 4 and proved to be a very quick learner and showed nice riding qualities. In continuation she realized her mare performance test and was covered with the stallion Vivanero. She got pregnant easily and had a very nice filly in 2022. After the seperation from her foal last autumn, she is now enjoying her life on the fields! Due to the age of the breeder we are looking for a new loving home for Ayla. She can be continued to be used as broodmare or can also be started again under the saddle. A video under the saddle, done in 2020, as well as x-rays without risky findings are available. Ayla Wind is registered as broodmare at the Hannoverian association as well as at the German Sporthorse association.

The pedigree of this nice mare is something very special: Through her father, the thoroughbred stallion Appleby xx, the valuable genetic of thoroughbred bloodlines are present and lead to healthy and performing horses.
Her dam Winni Wind already has successful offspring: The gelding Black Belantis, competing successfully up to Intermediaire I, as well as the licensed stallion Bela Bartok are siblings to Ayla. Further offspring of Winni Wind are competing in Junior level in dressage and in 1,20m in show jumping. Ayla's dam is half sister to the licensed Hannoverian stallion Dumbledore.

Ayla has had a rather chilled life until now on the fields and with her foal. She is an ideal option for breeding or also as leisure horse. Maybe after restarting the training under the saddle the future can also be in the sport, for example in cross country. 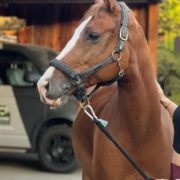 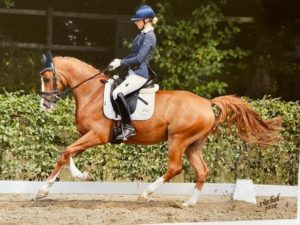 With his three expressive gaits, his stunning conformation and his riding qualities, this attractive riding pony gelding has already competed successfully in young horse dressage classes as well as in dressage classes level A (first level). He also does well the exercises of second level such as counter canter or shoulder in and can start to compete also at that level. He is a great sports-partner, always motivated and willing to learn and to perform. With his natural quality he offers best perspectives for a future also in the higher classes. Charmeur loves to be cuddled and he also likes to go hacking!

The sire Crown Charm of Royal has done is brilliant career in the dressage sport as well as as dressage sire. He was premium stallion, elite stallion, regional champion and several times finalist in the Bundeschampionat for young dressage ponies. Now he is successfully competing in M** classes.
The dam is by Minerva Bijou, who competed successfully up to the European pony Championships.

Charmeur Royal is a great dressage pony for teenagers and small adults that have already experience in dressage and are looking for a sports partner to get up to higher levels. For small children and for beginners he is not the right partner as he is an ambitious and active pony. 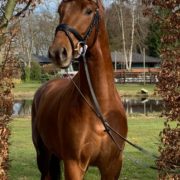 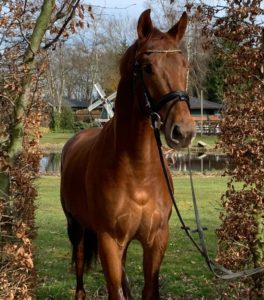 With his elastic and expressive mechanic in the trot, his uphill and ground covering canter and his good walk this beautiful black KWPN gelding has everything to become a successful dressage horse. Oh Daily started to be trained under the saddle in 2022 and is a motivated horse and a quick learner! This elegant gelding is also very nice and friendly from the ground and is therefor loved by his rider and groom!

Oh Daily is by the Westfalian dressage sire Daily Diamond.
On the dam side we find the famous dressage sire Jazz, who led the WBFSH ranking of the world's best dressage sires during many years.

Oh Daily is a very promising young dressage horse with the best perspectives for a successful career in the dressage rings. 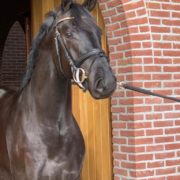 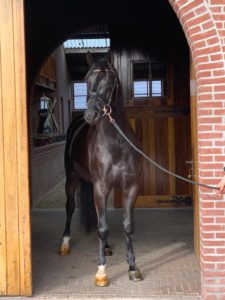 This dressage prospect has everything what he needs in order to become a successful dressage horse in the future: beautiful conformation and a lot of expression, three very good basic gaits and a positive working attitude with great riding qualities. This attractive black gelding is well broken and is gaining balance and power day by day. His elastic and ground covering mechanic in the trot with active hind legs fascinates his rider and gives him a great feeling!

Ontario is by the dressage sire Fürst Jazz, who is competing very successfully in advanced level. He is also very demanded and successful as dressage sire: out of his first crops of foals he presented 10 licensed son, among them the stallion approval champion Fürst Fabelhaft. Also in the dressage sport his offspring is convincing as they are gaining medals at regional and national championships.
His dam is by the dressage stallion Rohdiamant, who is one of the most famous offspring of the legendary Rubinstein.

Ontario is a very promising youngster for the dressage sport. 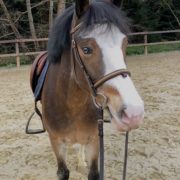 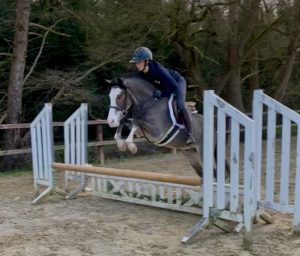 All children will adore Sammy! He is not only super beautiful and an eye-catcher with his nice color - he is also a great buddy for children due to his friendly character. Despite being still young he can already be ridden by children. He loves jumping and shows his talent for the jumps he has a lot of scope, is careful, quick and always has a great working attitude.

Sammy has a equine passport, his breeding is unknown.

Sammy is a promising pony for the show jumping sport, and not only for kids to start competing in lower classes - he is also a competitive partner for more experiences children! 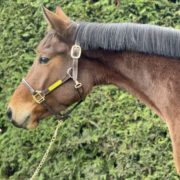 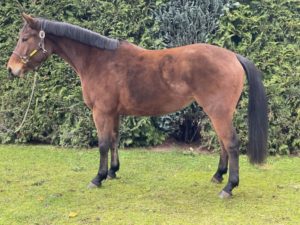 Pretty young KWPN mare with quality at the jump and nice character for the show jumping or hunter sport.

The pretty mare Odensa has recently been broken and convinces with her nice and friendly character. She is well ridden in all three gaits and behaves very well in the indoor as well as in the outdoor arena or also during short hacks. She realizes her first jumps under the saddle with a lot of easiness and intelligence. At the loose jumping her talent for the jumps can be seen - she jumps with a lot of scope, elasticity and a great mechanism!

Odensa was born in the Netherlands and has a KWPN passport. Her sire is unknown. Her dam Likita is a daughter of Golden Dream, who has been successful up to 1,50 m. She is out of a successful dam line and sister to several show jumping horses that are competing in 1,30 - 1,40 m classes.

With her nice character and her compact conformation Odensa is a great prospect for young riders and amateurs for the who jumping or hunter sport. 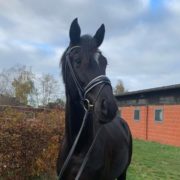 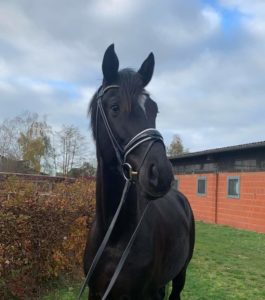 Impressive, sparkling black dressage youngster that has everything for a successful future in the dressage rings: Beautiful conformation with a lot of expression, elastic, ground covering basic gaits and top modern bloodlines. Coming from a professional breeder and having grown up in perfect conditions, he is currently starting to be worked on the lounge and will be slowly prepared for his tasks as a future dressage horse,

Select Me resembles a lot to his sire, the expressive dressage stallion Selectric. Selectric has very interesting bloodlines, being an offspring of the triple world champion Sezuan and the legends Donnerhall and Weltmeyer. He competed successfully in young horse dressage classes.
The dam of this interesting dressage prospect is by the well known San Amour. San Amour is with more than 50 approved sons and many sport successful offspring one of the most important sons of the great Sandro Hit.

Select Me is a very promising and talented youngster for the dressage rings. 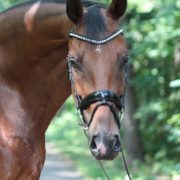 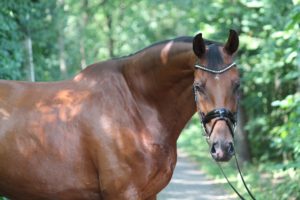 This large framed and beautiful shaped Vitalis - offspring won young horse dressage classes, then he won M** (junior level) dressage classes and made his debut in PSG level in 2022. Also here he won ribbons! With his stunning appearance in the rings, he convinces with his expressive extended trot and canter, uphill flying changes and nice half passes. He also shows a lot of talent for the collected exercises and already does some one-tempi flying changes. His correct and ground covering walk stands also out! His career in the advanced level has just started and with the right training he will get very far!

The sire of this dressage horse, the KWPN stallion Vitalis, was one of the most demanded dressage sires during the past years. With already 53 licensed sons and more than 50 offspring competing in advanced level, among them several international grand prix winners, the 2007 born Vitalis is currently one of the most successful dressage sires.
The dam Flavia is by the stallion Fürstentraum. Fürstentraum, by the world champion Fürst Heinrich, has competed internationally in the Young Rider category.

Veltins is a PSG dressage horse ready to compete immediately at that level and has quality and potential to be trained and competed up to Intermedia II - Grand Prix level.