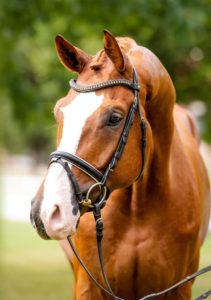 Fantastic Future - his name says it all: This colourful hannoverian chestnut gelding has everything for a fantastic future in the dressage rings and has already shown his talent as dressage horse: with marks up to 7.8 he won his first ribbons in young horse dressage classes. His three basic gaits are all above average and show elasticity, ground coverage and expression. His active hind leg leads to a good natural balance and self carriage, so that his further training for higher levels and for collected exercises is very promising. Fantastic Future comes directly from a committed and familiar Hannoverian breeder and is also in the daily handling a very nice and friendly horse.

The sire of this talented young dressage horse is the stallion Blue Hors Farrell, by Fürstenball - Da Caprio. Blue Hors Farrell was premium stallion at his licensing and is now successfully competing in PSG / Intermedia I level. He is also very demanded as dressage sire as his offspring is constantly getting top prices at the auctions and they attract everybody's attention at licensing and dressage events.
His dam Winni carries traditional Hannoverian bloodlines: Her sire Weltmeyer was one of the most successful dressage sires in the Hannoverian dressage breeding program in the 90s and 2000s, and also her dam's sire Werther has been one of the pillars of the Hannoverian breeding scene at his era. Winni already has several offspring that have been competing successfully up to M** (junior) level.

Fantastic Future is a talented dressage prospect for all sort of riders, directly from a family owned breeding stable.