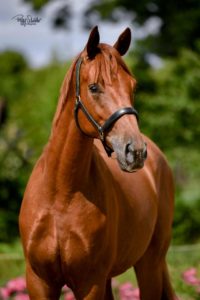 This Oldenburg dressage youngster not only impresses with his promising basic gaits and his nice conformation, but also with his sweet and gentile character. Belano grew up in a small and professional family owned breeding stable and enjoyed the last year in perfect conditions on large fields. Now he is ready to slowly start his training to become a nice dressage horse!

Belano's sire is the impressive stallion Belantis: Belantis won his licensing and his stallion perfomance test. He became Bundeschampion (German champion), was vice-champion at the world championship for young horses and is now successfully competing in Grand Prix. Also his offspring attracts everybody's attention at competitions as well as at stallion shows.
Belano's dam also carries dressage blood through the S-dressage winner and "stallion maker" Christ.

Belano is a youngster with great attitudes for the dressage sport.