You are here: Home1 / Horses2 / Capetown 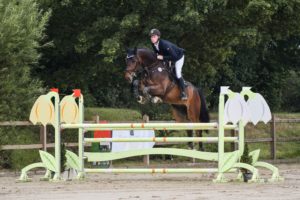 Through his sire Cocktail Jet , Capetown carries the genes of the famous Holstein gelding Calato, who not only competed himself up to the highest level, but also convinced with his top descendants. He has more than 150 descendants that are competing at advanced level and also more than 20 sons are approved breeding sires.
Also the dam's sire Sandro Boy was a star in the international top sport during years. With his rider Marcus Ehning he won several Grand Prix classes at CSI***** level, among others the finals of the world cup of 2006 in Kuala Lumpur. He won himself more than 1,2 Mio Euro and also his offspring is very successful in the international sport, having won also already more than 1,2 Mio Euro in price money.
Capetowns grand dam Ramilana not only competed up to 1,30 m herself , she is also dam to the mare Chacclana (by Chacco Blue), who competes successfully up to CSI*** classes.

Capetown is a high quality show jumping prospect with great perspectives for the high sport.