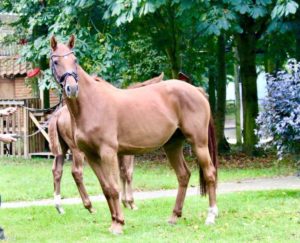 A elegant and tipy Holstein brood mare with an extraordinary genetic for the successful high quality breeding of show jumpers. Cosella was broken and convinced with very good riding qualities under the saddle. Due to her extremely interesting pedigree she was included in the brood mare pool of her breeders. She had a very promising filly by Diamant de Semilly that will stay as broodmare at the breeder. Therefor this exclusive broodmare is for sale and can enrich your breeding for Top show jumping horses. For 2021 she is expecting a foal by the great stallion George Z. George Z, by Kannan, is competing internationally up to 1,45 m currently and is half brother to Ben Maher's Cella, who won the team as well as individual silver medal at the European Championship in Herning.

Cosella is by the famous stallion Glocks London (former Carembar de Muze), who won the team and the individual silver medal at the Olympics in London with his rider Gerco Schröder. Glocks London was constantly among the top show jumping horses at all important competitions world wide such as Nations Cups, Global Champion Tour and CSIOs.
The Holstein dam line 890, which Cosella represents, is a very high performance dam line having produced an impressive number of successful show jumpers. Cosella's dam, the state premium mare V-Cassiata is sister to three show jumping horses with successes in advanced classes (1,45m) and to the approved stallion C-Future. Her sister P Contendra is dam of the approved stallions Quidam's Adel and Quintender. Both were also successful in the rings up to 1,45 - 1,50 m classes. Also the approved stallion Cantesini is out of a sister to V-Cassiata. The most famous representative of this dam line, and a direct family relative to Cosella is without doubts the great stallion Casall, whose impressive career in sport as well as in breeding fascinates show jumping passionates.