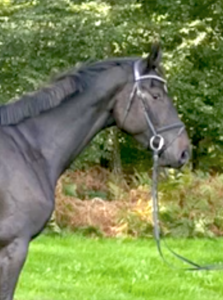 Not only a look at his breeding reveals that he is born for the show jumping rings - his first jumps also confirm his talent! At the free jump he convinces with a very good mechanic, rapid reflexes and scope. Under the saddle he currently realizes his first jumps and realizes them with ease and naturalness. Daniels Jack comes directly from the breeder, where he grew up in very horse-friendly conditions and is now getting used to his tasks as sport horse. His rider likes not only the quality at the jump of this young prospect, the great rideability and the positive attitude.

His breeding can't be more exclusive!
The sire Diarado ranks among the Top Ten show jumping and Cross Country sires world wide, and is the youngest sire to form part of this Top 10 group. He was winner of his stallion licensing, winner of his stallion performance test and at the Bundeschampionate, he placed 3rd twice. His offspring is successful in all show jumping arenas world wide.
The dam's sire Casall is the most famous figurehead of the Holstein breeding. The finalist of the European Championship, the Olympics and the World Equestrian Games was one of the world's best show jumping horses during many years and also his offspring is following his paths.

Daniels Jack offers excellent perspectives for a future in the sport for his genetics as well as for his qualities at the jump.