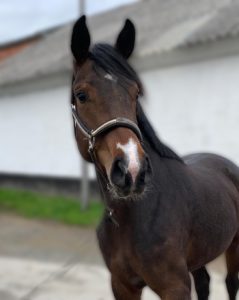 With her four white socks and the nice face, this beautiful young dressage horse already attract attention with her appearance. She has a very correct and harmonic conformation. Estela comes directly from the breeder and is currently learning to be lounged and to get to know the basics as dressage horse. Mit 3 sehr guten Grundgangarten bietet sie eine exzellente Perspektive für die Zukunft als Dressurpferd.

Estela has a very modern and performance oriented pedigree: Sire Estobar NRW won the stallion approval of Westfalia in 2006 and in 2007 he became Westfalian Champion. In 2009 he realized his 70 days test with sensational results and won the dressage part with an indice of a 154,74 points. In 2010 he got qualified for the Bundeschampionat and in 2011 he got first victories in advanced classes with just 7 years. In 2014 he got first placements in Grand Prix. Also as sire he convinced in every aspect. Among his offspring are Bundeschampions, stallion licensing winners and grand prix winners.
The dam is out of a successful and performance oriented dam line. She is by the Olympic champion and top dressage sire Desperados.

Estela is a raw diamond with a lot of potential for the dressage rings.