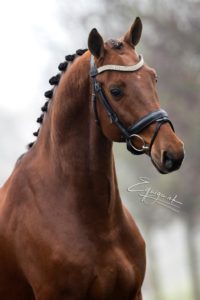 In the dressage arena this beautiful KWPN dressage prospect attracts everybody's attention: His basic gaits have a great mechanic with a lot of power from the hind legs and a very good rhythm. He is well trained for his age and convinces not only through the quality in his gaits, but also through his great attitude: He learns quickly, is always motivated and gives his rider a very positive feeling.

Last Night Texel has an outcross-breeding and that's one reason that makes him so special.
The sire Glamourdale won the KWPN stallion approval in 2014 and became second at the stallion licensing test. He won the silver medal at the world championship for young young dressage horses at the age of 7 and is now winning Grand Prix classes at international shows. He was named "KWPN horse of the year" in 2020.
His dam is by Voltaire - Corofino and represents the imprtant Holstein dam line No. 7126. She has already produced several sport horses that are successful in dressage as well as in show jumping. Also her dam, even though she has show jumping bloodlines, was successful in dressage classes at medium level.

Last Night is a promising young dressage horse with the best requisites for a successful career in the dressage arenas.