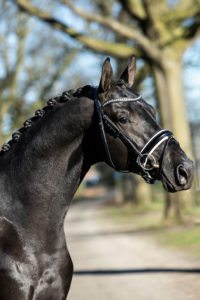 Neo is a very beautiful young KWPN stallion with very interesting capacities for a career in the dressage sport. He was recently broken and convinces with his great attitude and his capacity of learning in the daily work, moreover he shows no stallion behavior neither under the saddle nor in the normal handling. All three basic gaits are of great quality with a very good rhythm and a mechanic with a lot of elasticity and suspension. Here it definitely makes sense to invest in the further training of this young stallion!

A look at Neo`s pedigree shows that he must be born for the dressage sport! His sire Governor has a very exclusive genetic: He is by Totilas out of the full sister to Adelinde Cornelissen's Olympic champion Parzival. Governor was reserve-champion of the KWPN stallion licensing in 2014 and won the silver medal twice at the world championship for young dressage horses: As a 6 year old as well as as a 7 year old.
The dam of Neo is a daughter of the well known KWPN sire Apache. Apache was also reserve champion of his stallion approval and due to the high quality of his offspring, he got a dressage breeding index of 154 points.

This beautiful young KWPN stallion has everything what is needed for a successful career in the dressage rings.