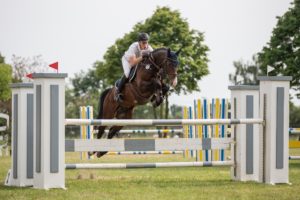 No Limits - a licensed stallion with victories and placements in competitions up to 1,40 - his name speaks for himself!

No Limits – is the name of this interesting stallion by Numero Duo, who became premium stallion at his licensing in Zweibrucken. Provided with elastic gaits, strong and energetic hindlegs for a well balanced canter, bascule and impressive reflexes at the jump, No Limits more over convinced also through his brilliant attiitude.

During his 14 days stallion licensing test in Neustadt Dosse he received three ties the grade 9,0, among others for his character and his motivation.

Already at the age of 4, he became regional champion and was among the Top 10 of the most successful 4 year old show jumping horses of Germany. But also in the following years he had great successes in the courses. In the season 2019 he demonstrated his quality with numerous placements and victories up to 1,35m and he was also qualified for the Bundeschampionat (German Young Horse Championship) in Warendorf.

In 2020 No Limits started to compete successfully in advanced level: With only 7 year, he gained many placements with his rider Philipp Brodhecker in Youngster classes of 1,40 m.

His sire Numero Due is by the famous show jumping stallion, classified as “Preferent”, Numero Uno. Numero Uno got many victories and important successes in CSI**** classes with his rider, the European Champion Marco Kutscher.

The dam’s sire Wolkenstürmer has been successful in the show jumping courses up to 1,40 m although his pedigree is more oriented
towards the dressage sport. Wolkenstürmer was premium stallion and produced many championship and premium foals.
. He is by Wolkenstein II (vice-champion of his stallion licending of 1992,
German dressage champion of three year old stallions in 1993) and is a direct son of the legendary Weltmeyer.

A stallion that we recommend for high casses in show jumping and for breeding!