You are here: Home1 / Horses2 / Euphoria 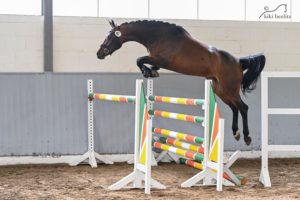 If you are looking for a promising, talented youngster for the show jumping arenas, here you have a raw diamond! This young Hannoverian mare, bred by the famous Nations Cup sire Eldorado, comes directly from the breeder. Euphoria is state premium candidate and shows an excelent mecanism, a lot of scope and agility at the loose jump. She has been under the saddle only for a short time, but also during her first jumps with a rider she shows an amazing attitude and great quality. She convinces not only at the jump, but also with her positive and friendly character, and gives her rider always a nice feeling.

Euphoria is by the internationally successful Eldorado vd Zeshoek, who, together with his rider Willem Greve, represented the Netherlands several times in Nations Cups and CSIO*****. Also among his offspring we find many very successful show jumping horses that are competing in the biggest arenas of the world, such as their father.
Euhoria's dam, the state premium mare Caipirinha, has already a licensed son. Her sire is the famous Contendro I, who has ranked under the top 10 stallions in the WBFSH ranking for show jumping as well as as for eventing horses during the last years.

Euphoria is a extremely talented young show jumper with ideal conditions for a successful future in the sport.