You are here: Home1 / Horses for sale2 / Dressage horses 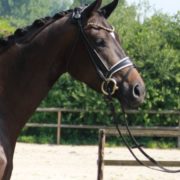 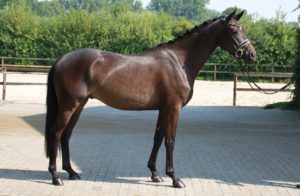 This beautiful and elegant Trakehner gelding called Eron has been under the saddle only for a few months and convinces with the quality of his three basic gaits and his implicitness of realizing all demanded tasks under the rider. He gains strength and balance day by day and the expression, cadence and elasticity of his basic gaits now start to unfold under the rider. Light in the contact and comfortable at the gaits, he is a horse that is ridden without strength and gives his rider already a very positive feeling.

The sire of this promising Trakehner gelding is the demanded dressage sire Ivanhoe. This offspring of Millenium attracts not only breeders of Trakehner horses due to his own successes as well as due to the impressive quality of his offspring. Besides other successes, he won the gold medal at the Trakehner national championship.
The dam of Eron is by the dressage sire Kaiser Wilhelm, who competed successfully up to Grand Prix level.

Eron is a promising youngster for the dressage rings and due to his confirmation and his riding qualities he is very suitable for ladies and amateurs. 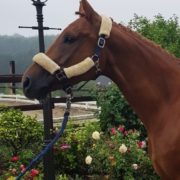 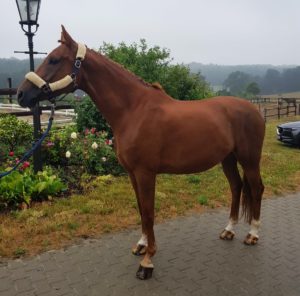 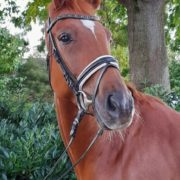 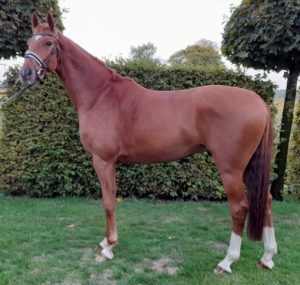 Very sweet Hannoverian gelding with a great character and perfect riding qualities, an ideal horse for the whole family

This beautiful Hannoverian gelding Sandringham is an ideal horse for the whole family: He is not only a promising dressage prospect and could already gain ribbons in young horse dressage classes, he also can be ridden perfectly by children and beginners. He also likes to hack out and behaves very well and also in the daily care he is a really sweet and gentle fellow! His current owners bought him as a 2 year old, always treated him as a family member and trained him slowly and with a lot of love!

Sandringham is by the Sir Donnerhall-son Sir Heinrich, who became Bundeschampion of the 6 year old dressage horses in 2014 and also represented Germany at the World Championship for young horses that year.
His dam is an offspring of one of the most famous sires in the Hannoverian dressage breeding of the 1990s, Brentano II. She has already got several offspring competing successfully in the amateur sport-

Due to his perfect character, Sandringham is an ideal horse for amateurs, children and teenagers. Being an ideal family horse he will make his new owner very happy the the amateur dressage sport as well as as a pleasure horse. 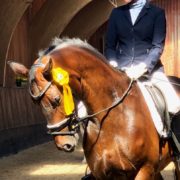 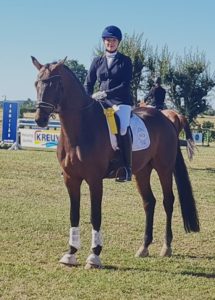 Umberto is a real buddy and riding him makes fun day by day! He is always well motivated, uncomplicated and well behaved, and as such gives his rider a very good and secure feeling, at home as well as at competitions. He is directly from the breeder, was trained slowly and with a lot of love! With the suspension and the ground coverage of his basic gaits and his rideability, he won dressage tests level 1 with a young girl and got the silver medal in dressage tests level 2. He also realizes well flying changes and half passes, so that a start in level 3 as well as the training for further levels can also be envisaged.

Umberto is son of the dressage sire Un Amore and as such descends of the olympic gold medall winner Unee BB (Jessica von Bredow-Werndl).
The dam Farola, a granddaughter of the legend Rubinstein I, has already produced several successful dressage horses such as the mare Parole, who represented the Netherlands in the Young Rider category.

Umberto is a well trained dressage gelding at 3rd level with a unique character, and as such is a very good option for teenagers, juniors, amateurs and maybe also for the para-equestrian sport. 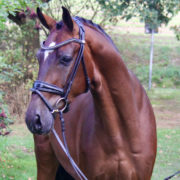 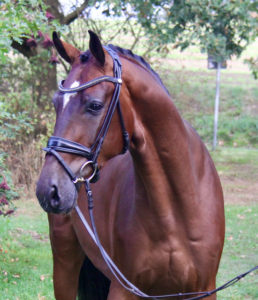 Ferragamo is a dressage prospect every rider would dream of! Picture-perfect and modern conformation, three excellent basic gaits and moreover very easy and trainable for his age. His good natural balance and his constantly active hind legs lead to a uphill mechanic with a lot of freedom in the shoulder and expression. Ferragamo comes directly from a very professional breeding family and fulfills highest demands for a future in the dressage rings.

Ferragamo is a young dressage prospect that meets all requirements for a successful career in the dressage rings. 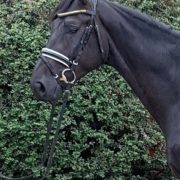 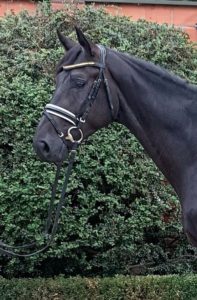 This talented young hannoverian stallion is directly from the breeder. With a final grade of 7.8 and individual grades for his gaits of 8 and 8.5 he already won a golden ribbon at a riding horse class for 3 and 4 year old horses. This big framed, elegant dressage stallion not only convinces with his basic gaits that are elastic and ground covering, his powerful hindleg and his mechanic, but also with his nice riding qualities. He is always motivated and learns quickly. He behaves very well at the daily training as well as at competitions!

The sire Blue Hors Emilio carries first class dressage bloodlines through the dressage sires Escolar and Lauries Crusador xx, and became premium stallion at the Westfalian stallion approval.
The dam's sire Romancero H was a very demanded sire in the 90s / 2000, and carries the famous genes of the stallion Rohdiamant. Ed's dam Rajana has another son who is very successful in young horse dressage classes.

This beautiful young Hannoverian stallion is a talented dressage prospect for a future in the dressage rings. 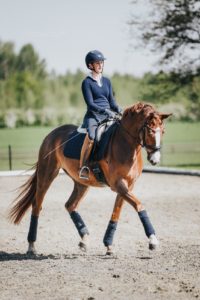 This nice Hanoverian mare has already competed successfully in young horse dressage classes and convinces at the competitions as well as at home through her great character and her perfect working attitude. She has three ground covering and expressive gaits that received high noted by the judges. Learning new exercises seems to be very easy for her: She is secure in the flying changes and she also realizes half passes in trot and canter already pretty well. She is a real sweety - always friendly, motivated and kind, under the saddle as well as in the daily treatment!

The sire Bon Coeur has produced many impressive dressage horses. This sire by Benetton Dream - Sandro Hit became Hannoverian Champion, won twice the silver medal at the Bundeschampionate and is now competing successfully at PSG / Intermedia I level in the USA. Out of his first crops of foals there are already approximately 30 approved sons and his offspring is also very demanded as dressage horses.
The dam sire Longton is by the dressage sire Locksley II and also produced successful offspring for the dressage competitions.

Bonjolie is a great offer not only for ladies and young riders, that are looking for a talented young dressage horse with great riding qualities. 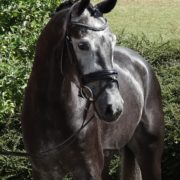 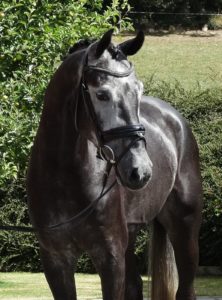 Promising and eye-catching dressage prospect: Fortendro has everything a successful future dressage horse needs to have: Three very good basic gaits with a lot of elasticity and ground coverage, a nicely and correct proportioned conformation and a very good working attitude. Well broken he gives a nice feeling to his rider day by day, learns very quickly and is ready to show his talent for the dressage rings also to the judges!

The sire of this promising dressage prospect is For Romance I, who was awarded as VTV Sir of the year and is successfully competing in Grand Prix. Not only For Romance himself has made a brilliant career from being a young horse till now, also his offspring is following his paths. Besides 36 licensed sons he has finalists in the German as well as World Championships for young dressage horses and many of his offspring has already reached the advanced level.
On the dam side Fortendro is by the well known Hannoverian sire Contendro I, who has a brilliant reputation as versatile sire, as his oofspring is very successful in dressage, show jumping and military.

Fortendro is a very talented dressage youngster for professionals as well as for amateurs. 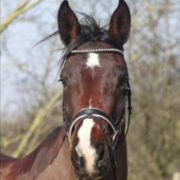 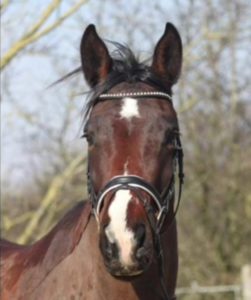 This beautiful and very well bred Holstein mare Lillie is still at the beginnings of her formation under the saddle. She realized her first jumps under the saddle with a lot of implicitness, intelligence and carefulness. And she likes to jump! At the free jump you can see her good scope and her power for higher classes! Also in the daily dressage work she gives very good feelings to her rider: She has three nice and comfortable basic gaits and an easy ans supple contact. As such we will not only be a prospect for the show jumping courses, but also for the dressage rings. She has already demonstrated her nice character at her first competition: this was a riding ability class for 3 and 4 year old horses.

Lillie is by the currently very demanded show jumping sire I'm Special de Muze. I'm Special de Muze is a son of two nation cup winners: The sire Emerald as well as his dam Walnut de Muze were successful at the highest level in competitions all around the world with their rider Harrie Smolders. His offspring is also already competing at advanced level.
Lillie`s dam is by the sires Quarz Ask and Lantaan. Her dam is a sister to an international show jumping horse successful at 1,60 m and to a Grand Prix dressage horse. She represents the holstein dam line 730b.

Lillie is a very interesting and promising young show jumping horse, but she will also assume a very good position in dressage rings or as allrounder. Moreover she is a very suitable horse for amateur riders. 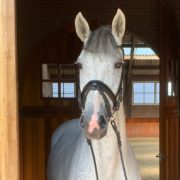 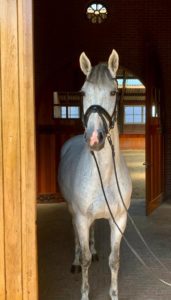 Esplana has been competing successfully at PSG / Inter I level with a Young Rider and not only realizes the exercises of these levels perfectly, but is also introduced in Grand Prix exercises such as tempi changes and piaffe / passage. This pretty Holstein mare convinces not only through her security in the exercises and the good basic gaits, but also due to her great riding quaities. She is very easy at the riders aids, it comfortable to sit and shows always a nice and collaborative character. Also less experienced riders can learn all exercises of the advanced classes with this experienced and safe dressage horse.

Esplanada is a Holstein mare with bloodlines that are more focused on show jumping. Her sire Cormint competed successfully in show jumping and has an excellent reputation as show jumping sire. Askano as her dam's sire was a versatile stallion with successful in dressage as well as show jumping, and also has offspring competing in both disciplines.

Esplanada is a super horse for competitions at advanced level as well as a schoolmaster for everyone who would like to learn exercises from PSG to grand Prix level. She can be ridden also perfectly by young riders as well as amateurs and gives her rider always a great feeling.